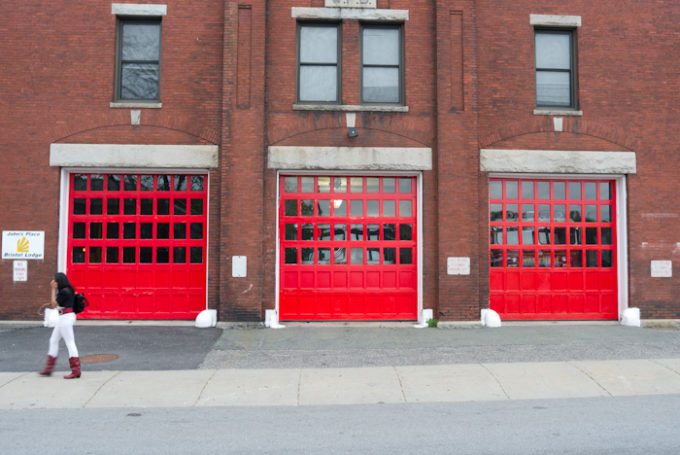 Even with the X1’s quirks and limitations, I had a good time shooting with the X1 on vacation. Now that I’m back home, it’s time to head to the streets with the Leica X1.

Flying Under the Radar For me, a big part of street photography is staying off of people’s radar. I like to capture scenes as if I was never there. Luckily, the X1 excels at flying under the radar. It’s compact size and lack of viewfinder makes it look like a regular point and shoot which most people completely ignore, especially if you are shooting in an area with a good amount of tourism.

Another befit that I’ve mentioned before is the whisper-quiet shutter of the X1. You could be right next to someone and they would have no idea that you’ve fired of a shot or two. This is still by far my favorite attribute of the X1. One thing I (and several other photographers) have noticed is that when you are out shooting with a DSLR, the moment you bring the camera up to your face, people either look right at you or look away. This can make things a bit tricky when shooting out on the street. You can either try to get in close with a 35mm or 50mm and sneak in a shot or you can bust out a big zoom and shoot from a distance. Personally, I prefer to shoot with a small prime as they attract less attention and you don’t feel like a perv shooting from a mile away. I found the X1’s 35mm lens equivalent and LCD screen pretty enjoyable to shoot with on the street. Also, because you are holding the camera out in front of you like any other type of point and shoot or camera phone, people are most likely going to ignore you.

Performance and Other Observations The X1 felt more at home on the streets than on Sanibel Island. The focal length was a good choice by Leica; shooting with a 35mm on the street feels very natural. Capturing street scenes was pretty much just like using my Panasonic GF-1 except everything was much, much slower. Again, the speed or lack thereof, of the X1 definitely impedes performance when out shooting. This is my biggest complaint with the X1.

I missed tons of shots due to the slow autofocus. I was actually pretty bummed because two of the shots would have been awesome. Instead, I ended up with nothing but a memory of the scene. This gets old fast. To counteract the slow performance, you essentially have to setup in one spot, pre-focus and get ready for something to happen. I don’t know about you, but I don’t classify that as exciting street photography. I want to be out and moving around so that I can move quickly to react to changing situations. Another time I was bitten by the X1 is its write speed. The buffer on the X1 is pretty dang slow. I shot a burst (3-4 images) and the X1 locked up for several seconds. It’s tough to capture images when the camera is locked up. I wasn’t using a cheap-o card  either (SanDisk Class 4) so I’m guessing the processing power of the X1 is not really top notch.

So was it all bad shooting on the street with the X1? No, definitely not but you are very limited as to what you can shoot successfully with this camera. As long as your subjects are somewhat stationary, you’re golden. When subjects start to move quickly, then you are going to have serious problems. You can say this about most compact or advanced compact cameras but none of them cost anywhere near what an X1 will run you.

If you’ve read any of my other posts on the X1, you know that I’ve been comparing the X1 to my Panasonic GF-1 quite a bit. In the next post, I’m going to put the X1 up against the GF-1 in a head-to-head challenge to see if the X1 is really worth almost three times the GF-1/GF-2.