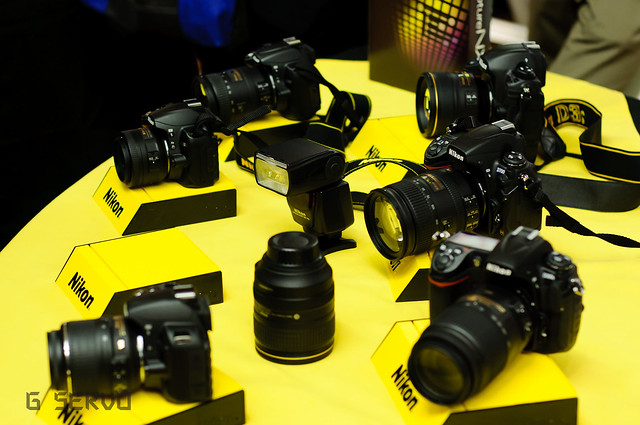 Recently at Pepcom’s Holiday Spectacular, I got hands-on time with some of Nikon’s latest additions to their DSLR line. Check out my findings after the jump. Having just bought the Nikon SB-600

this was a tough one. It’s such a nice leap ahead in its controls making it easier to use then the SB600 and possibly SB900. It has a great rotary select dial for function setting and a remote and master button that makes things that much easier. It has a 90 degree up and 7 degrees down bounce and the head position can rotate 360 degrees. This flash can act as a commander also or a remote light source. I did not get a chance to use it on my camera though. The Nikon SB-700

had a fast recycle time, compared to the SB600. It’s a nice, well thought out speed light.

This flash, about the same size as an SB600 and built very sturdily and slightly heavier but lighter the SB-900

speedlight. It is good for most Nikon Photographers with a DSLR. If I did not just by my SB600, I would be buying this, and I still may end up with the SB700 at some point. The controls are much better on this flash the previous Nikon Speedlights. It’s not firmware upgradable like the SB900 but has most of the same features.

Editor’s Correction: the SB-700 can be updated via a connection to a digital camera.

is a solid entry level 14.2 MP camera. I found the shutter to be slightly more aggressive that the D3000 and the overall build to be about the same. The features, like dedicated advance-mode switch and dedicated movie-start and live-view controls, were much improved. In my opinion the D3100 is an evolved hybrid of the D5000 and the D3000. I was not allowed to put my SD card in this camera for sample images (it was a pre-production unit), but shooting with it was simple and interesting. The control dials and buttons were pretty straight forward. I was able to pick up camera and shoot right away. It has 11 autofocus points and the shots on the LCD seemed to come out nice and clear. I found it to be comfortable in the hand and very light. I did not get to spend enough time with the camera to find any problems with it.

I would get this instead of the D5000 because of the improvement in controls and increase and megapixels. If I were a photographer looking to upgrade from a Nikon D40 or D60 this would be the camera for me too. Due to its guides and easy menu’s it is also good for families and beginner photographers. Wow, this Camera, to me is only related to the D90 in lens format only.

to be more in line with the D300 than a D90. It was fabulous in the hand. The 39 autofocus points were amazing. In terms of weight, it felt about the same as the D90 which was nice for all it can do. I really like the U1 and U2 selections on the top dial, which allows you to store you own camera settings. Like the C1 C2 C3 dial positions on Canon DSLRs it allows you to recall customs settings you have programmed into your camera.

The dual memory card slots can take SD, SDHC or SDXC. One of my favorite changes is the live view button on the back, it makes going into live view and recording video much easier. Again, I could not put a card in. I’ve put serious thoughts into upgrading my D90: if it were not for my desire for a full frame camera my D90 body would be for sale.

The Nikon D7000 weighs about the same as Nikon D90, and there is literally a 70 gram difference. All the controls are nicely arranged and easy to manage. It’s almost as functional or more functional than the D300 having 31 Autofocus point where the D300s had 51 but the D7000 has 16MP, where the D300s has 12mp. The D7000 has 2 SD slots while the D300s has 1 CF slot and 1 SD slot. You can shoot a wedding, films, portraits and anything else you can think of with this camera.

Like the D90 the D7000, in my opinion from the quick hands on that I had, is great for those photographers wanting to go pro or just really serious about photography. Serious art students, professionals and prosumers will love this camera because of the functionality