Why Shooting Celebrities Sucks: A Reflection Photographing Julia Roberts on the Set of Eat, Pray, Love. 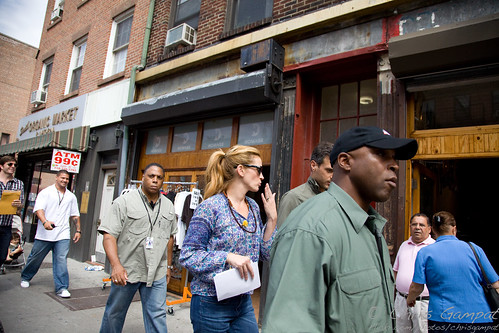 If you’re a reader of this blog, or if you’ve followed my work for a while, you’ll probably know of the dark secret in my time as a photographer. When I was right out of college, I had an extremely brief tenure with an agency as a celebrity photographer. One of my gigs was shooting Julia Roberts on the set of Eat, Pray Love which is now in theaters. The photos in this story were shot a year ago in Carrol Gardens in Brooklyn, New York where part of the movie was filmed. Though not my worst gig, it was a huge learning experience and began to solidify my exit from celebrity photography.

It was 8AM and my Gmail inbox has a message stating that I have a new assignment. Essentially, the cast of Eat, Pray Love needed to be photographed, “candid style,” which essentially means no posed portraits. It sounded simple enough.

And so at 9:15 AM, I’m in the Brooklyn area, seeing signs that the movie is being filmed from 9AM to 8PM the next day. So what does that mean? A stakeout. Literally, blend into the fabric of society again and get out of photographer mode. Less a stalker than the ultimate fan boy. Well, not really. That’s what you tell yourself to justify doing such a dirty deed when first starting out.

I didn’t do that. As a trained photojournalist, you’re always taught to be honest and up front about your intentions. Carry the camera with you, have it out so that people become comfortable with you. Little did I know that you don’t always do that on a movie set. And so after walking around and patrolling with the camera out, the cast becomes aware that there are photographers around and want to “protect the talent.” This is actually a gimmick for, “Let’s create controversy by perhaps having the talent act like they’re pissed off and assaulting the photographer so that they will get better press for the movie. It’s not like we won’t be able to compensate the photographer in the lawsuit, it’s brilliant!”

And so Julia hid in her trailer, forever and ever. 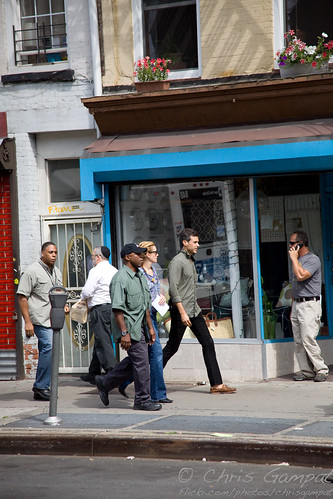 Until 7PM the same day, Julia finally comes out and ends up in a laundromat where part of the movie is filmed. As a Blind Photographer, I wasn’t clearly able to see her from across the street.

Why was I across the street? Because they literally fenced off an entire five or so blocks.

To make an ultra long story short, I ran across incoming traffic to try to catch a full frontal image of Julia and failed terribly. As you can see in the opening photo, the guard behind her looks like he’s about to punch me in the face. With Canon EOS 5D Mark II with EF 24-105mm f/4 L IS USM Lens

in hand, that wasn’t about to happen and I wouldn’t let my recent investment be harmed in anyway, but I needed the photos. But in public, a photographer has every right to take a picture of someone.

This was all a mistake though, because a guy running across a street will always set off alarms.

Though some cast members did try to help me as they realized that I was just a kid right out of college trying to pay bills, the agency had the last word. And their words:

Hi Chris,
We have reviewed your images of Julia Roberts and we need to go over a few things as these images are not sellable.
In order to achieve a sellable celebrity image there are certain things you must do to capture the best image. Please follow these instructions if you want to continue shooting.
1.  You must get close to the celebrity, if you do not have the required telephoto lens you need to do everything possible to get in nice and close to the celebrity.
2.  You have to shoot full frame, head to toe in vertical position. Always, always shoot vertical, never horizontal. We must be able to see the celeb from head to toe and allow some buffer on all sides for post edit.
3.  Get in front. No matter what the situation, you must be in front of the celebrity when shooting. If she is walking down the sidewalk, you need to be in front of her walking backwards while shooting. Side profile shots will never sell.
4.  Follow from start to finish. If you see Julia walking from a trailer or movie set, follow her to the next location and keep shooting. Her security may ask you to stop but you are well within your right to keep shooting as long as you are not blocking her and you are not on private property.
Let us know if you still want to proceed. It takes a couple tries to get the hang of it but the above criteria must be met in order to achieve sellable images.
Can you let us know what lenses you currently shoot with.
Regards,

I mean, they were nice about it that time around. That was awesome. Once you start screwing up more though, it’s not.

So why did I get out of the business? Too many people in it and not enough of an audience. Also, there is way too much competition. Too many Brooklyn hipsters also had their Canon Rebels and 30Ds with big lenses to capture the celebrities. So when you’re not competing with other photographers, you’re competing with normal folk.

That’s not to say that the images aren’t viewed at all. Men and women alike regularly look at them. Women look in magazines, and men look online. Any man that honestly sits there and says that he doesn’t occasionally take a longer look at something like a photo a Kim Kardashian wearing almost nothing and walking confidently along the beach or her private pool is lying to himself as those photos were probably snapped by a celebrity photographer.

A lot of the gig required crossing my own boundaries that were instilled into me when training under a very admirable photographer.

And though I respect the work of celebrity photographers, it’s when they get vicious where I look down upon them as it makes all photographers look bad.

Either way, my advice to college students just getting out and wanting to make money is to instead try to do portraits or events or be a wedding photographer’s assistant.