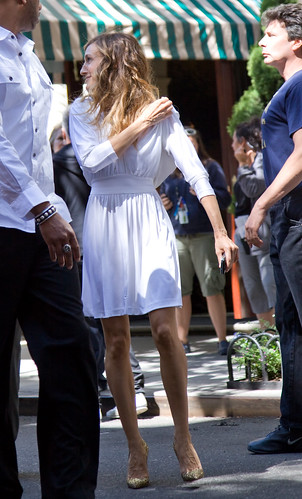 With the imminent release of Sex and the City 2 on May 27th, I’d thought I’d share my experience of photographing Sarah Jessica Parker on the set of the movie while it was filming last summer. Those of you that are fans of the series and the movies may be delighted to know that Sarah is actually a very pleasant, sweet and nice person. In fact, she was one of my few positive experiences when photographing female celebrities back when I was a celebrity photographer.

This photograph was taken around the Metropolitan Museum of Art in New York City, right by Central Park. It was quite the day and also quite the learning experience.

Upon hearing that Sarah was going to be there shooting, I figured that I’d get there bright and early to get some exclusives. Little did I realize that around 50 other photographers also thought the same thing. Because of this, many photographers essentially have the same photos of her. It’s photos like the one above that stand out because of the fact that there are an extra ten photographers that stayed behind after shooting.

That day was rough. Between being yelled at for getting in the way of other photographers and not giving others enough space to work, I was also quite under-equipped. The Canon 5D Mk II and 24-105mm F4 L IS is not exactly a combo that most photographers carry with them to shoot celebs, especially when that celeb is halfway down a city block. Despite the disadvantages, the 21MP sensor allows photographers to crop in to nearly the center of the photos and still produce very usable and lovely results. This is what happened to me for most of my shots. It isn’t the case with the above photo, where Sarah is about seven feet away from the camera.

Besides professional photographers, there were also the loads of fans trying to squeeze their way in to take a picture for bragging rights—as well as the occasional and dangerously close NYC buses and Taxi cabs that were right behind or sometimes besides us.

Now also consider the deadline for many photographers: if you’re shooting for an agency, you need to get them your photos right away so that they can make the sale and so that both you and your agency make money. Otherwise, you’ll be fighting tooth and nail in a very over-saturated market. To do this, I located the nearest Barnes and Noble and edited the photos on a Macbook and uploaded them onto the agency’s server via the free wifi. After that, it was off to the set again to shoot another batch. This process repeated itself around four times. It ensured timeliness.

Something like that isn’t for the weak: lugging photo gear and a Macbook around along 10 city blocks in the hot and humid NYC summer isn’t exactly fun. It’s actually recommended that you bring a water bottle.

So did I get to talk to Sarah? No, she was way too busy. In my opinion, she photographs beautifully but isn’t particularly attractive in person. Perhaps it was the angles though.

Sarah was and still is a precious commodity for celebrity photographers. Widely known and busy females are what make sales to magazines and newspapers. When photographers speak to the readers and buyers though, we see a different story. Sit down in the NYC subway any day of the week and take a look at what your female riders are reading. If it isn’t a self-help magazine or book of some sort, then perhaps it is a tabloid with the latest celebrity gossip. Now take a look at the pages they spend the most time on: they’re mostly staring at the images of men. Not just any men: very good looking men. It’s a fact, many heterosexual females will rather stare at a picture of Gerard Butler with his shirt off than Sarah Jessica Parker on the set of a movie. In contrast, men are the ones that want the half-naked Hollywood sweethearts—but we tend to do online for those these days.

Because of this fact, magazines and media sources in general should pay lots more for images of men. The good looking ones are just as objectified as some females. It really isn’t fair for female celebrities to be chased down just because there is a lot of money involved in getting snapshots of her; and yes it is mostly the females.

In summary, Sarah Jessica Parker was a pleasure to shoot. But it really wasn’t worth the pay.