All photos by Tariq Zaidi. Used with Permission.

We are bombarded by images of the latest fashion and styles everyday, with either commercial or creative intent (and sometimes both). In his fascinating series  however, London-based documentary photographer Tariq Zaidi has found a unique way to look at fashion through social commentary. The Sapeurs of Brazzaville introduces us to the practitioners of La Sape, a fashion subculture in the cities of Kinshasa in the Democratic Republic of Congo, and Brazzaville in the Republic of Congo. They are called sapeurs (dapper gents) and sapeuse (dandy ladies) who choose to be the embodiment of elegance, flamboyance, opulence, and glamour in a place that is anything but.

Above: Basile, 51, has been a sapeur for 30 years and works as a manager of human resources. His most treasured item of clothing is his Jean Courcel suit.

Intrigued by the glaring disparity between the looks the sapeurs create, their humble backgrounds, and the environment they live in, we wanted to learn more about the series from Tariq himself. In the interview below, he indulges us with some details about photographing these highly creative and stylish people, especially his mission to portray them as symbols of dignity amidst adversity, and shed light on how they are seen as celebrities in their humble communities. Maxim, 43, has been a sapeur since he was seven years old. He mixes labels such as Yves Saint Laurent, Pierre Cardin and Christian Dior with suits that he has designed and made himself. Now married with two children, he teaches others the art of how to dress elegantly.

Phoblographer: Hello Tariq! Can you tell us something about yourself and what you do?

Tariq Zaidi: In January 2014, I gave up an executive management position to pursue my passion of capturing the dignity, purity, and soul of people within their environment. My work focuses on documenting social issues, inequality, endangered communities, and traditions from around the world. I work as a freelance photographer based out of London, England. I have worked in 18 countries across 4 continents, mainly in the developing world. My work has been shown in over 60 international exhibitions, and has been featured in The Guardian, BBC, CNN, National Geographic, The Washington Post, Der Spiegel, GEO, El Pais, LA Times, and Smithsonian Magazine, among other respected international titles. My work has been recognized through a number of prestigious awards including POYI, UNICEF, NPPA, IPA, and PDN Photo Annual.

My current focus is on creating a visual anthology of dignity and community in some of the poorest regions of the world, entitled Capturing the Human Spirit. The first three installments of the project were featured at Visa Pour L’image, International Festival of Journalism (Perpignan, France) in September 2018.

My work is represented by Zuma Press (USA), Caters News Agency (UK), and Getty Images (UK). I am a self-taught photographer and hold an M.Sc. (Master of Science) from University College London. Kass, 42, has been a sapeur for 20 years. He has three children and sells clothes in a small shop. His favorite item of clothing is his J.M. Weston shoes, which can cost hundreds of dollars.

Phoblographer: How did you get into photography and discover the kind of imagery that you make now?

Zaidi: After almost 20 years in the business/corporate world, I was so tired of the corporate environment. It was just killing me, and I felt like I was going to die if I kept doing it. I need to live, do what I love, and give it a shot.

A friend of mine who is a very successful professional photographer said to me, “Do you know how hard it is to become a professional photographer? Because just in London alone there are something like 22,000 photographers who are trying to make a living. You are just not going to make it, it’s just so hard. Before you quit your job, make sure you have enough money to somehow survive for the next three to five years because you are not going to get anywhere for at least 5 years — and that’s if you are damn good and lucky.” You know what, I just said, “Perfect. I love that challenge and I’m going to go for it irrespective of what you say.”

I was very lucky, I had a tremendous amount of success for a beginner in my first year. I was involved in multiple assignments. I was lucky enough at that time to be teaching. People were buying my photographs. I was getting published and things just flew! Even though my target for year one was not too lose money, I actually made some money, enough to try another year. And then another. Well, here we are now. Judith, 39, has been a sapeuse for 18 years. She is married with 3 children and works as a Police woman. Okili, 10, (Judith’s son) has been a sapeur for 5 years. He is still at school. His favorite item of clothing is his Yves Saint Laurent suit.

Phoblographer: We’re curious about how this project came to be. How did you meet the sapeurs you photographed for this body of work?

Zaidi: Over the years I used to travel a lot, my aim was to see the world, as many places as I could. Travelling with a small backpack and just going. I did that for many years and fell in love with looking at different cultures, languages, falling in love with the world. I didn’t take my camera with me all the time in the past. Today, I am more interested in telling the stories of many of the places I traveled to when I was younger. I saw amazing cultures, people, and places. I want to try to share their amazing stories and lifestyles before many of these traditional cultures and places become part of the homogeneous world we now live in.

I saw my first sapeur when I was travelling by land from Morocco to South Africa and was fascinated by how he looked given his surroundings – I promised myself to come back and find out more about him and other sapeurs. I went back again in 2017 to start my work on sapeurs. Edith, 47, has been a sapeuse for 36 years. When she’s not raising four children and tending to the house, she enjoys dressing in Pierre Cardin suits, Versace sunglasses and smoking her pipe.

Phoblographer: The Sapeurs series seems to be a slight departure from the social issues and inequality that you usually cover as a documentary photographer. What made you decide to pursue this story?

Zaidi: Well yes and no. I think they fit into my overriding work on showing dignity in adversity. The Sapeurs all come from a very humble background – taxi drivers, gardeners, tailors, gardeners, etc. – they find dignity and provide joy and happiness to their communities which are also from very humble backgrounds and have hard lives and live in a difficult environment. So while visually the work has an environmental fashion feel, the core is about dignity, joy, and happiness in a difficult environment which is what most of my work covers.

Phoblographer: There’s a great deal of contrast between how the sapeurs dressed and the setting you photographed them in. Was this intentional and part of the concept? How did you explain it to them?

Zaidi: That is what part of being a sapeur is all about – looking and feeling like a million dollars even though your environment and real life are much more challenging. All the images where taken in the immediate neighborhoods where the Sapeurs live. What you see is how it is. Arnaud, 31, has been a sapeur for eight years. He is married with two children and works as a tailor. He is modelling one of his favorite suits, one of his own creations.

Phoblographer: What was the most stand out aspect of the subculture that you wanted to shed light on?

Zaidi: I wanted to show the joy and happiness the sapeurs bring to their community. They are treated as celebrities and rock stars in their community. They are respected and literally followed down the streets in their neighborhoods, and my larger body of work on the sapeurs focuses on these moments. Today, I am only presenting a small series of 10 portraits which were taken in the neighborhoods where these sapeurs live.

Phoblographer: Do you have any unforgettable stories behind the project? What detail surprised you the most or made the most impact on you while you were working on it?

Zaidi: Similar to the point above – the reaction of the children, people on the streets, women all reacting to the wonderment of seeing a sapeur in the street is joyous to see and be part of. Adzo, 46, is married with 10 children and owns a small clothes shop. He has been a sapeur for a decade.

Phoblographer: We’re curious about your creative process. What kind of planning, logistics, and execution are usually involved in your projects, especially for Sapeurs in particular?

Zaidi: You need to research. What has already been done, what are you going to do differently, what are you going to do better. I spend a hell of a lot of time researching what is out there already. Either about the countries, the people, or the subject matter I want to tackle. You need to plan your trip well, logistically, for factors like is someone going to help you, do you have enough money, who are you going to meet with, who would you like to meet with, what story do you want to tell. Everything will most probably change when you are there, but it’s good to have a thought, an idea, a dream in your mind before you even start. One of the most important things is whatever you do, you have to be humble to the people you are working with, no judgment ever. If you are humble and respectful they will allow you to get closer to them, closer into their lives. That is where amazing images come from. 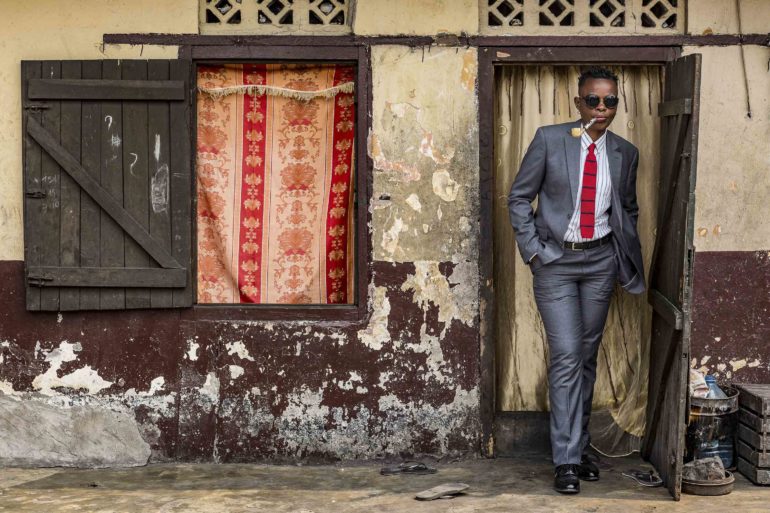 Celmantine, 52, has been a sapeuse for 36 years. She has five children and is a housewife. She is one of a growing number of women in Brazzaville with a passion for dressing ‘commes les garcons’. Here she is wearing a suit from Next of London and smoking a signature pipe, made of Congolese ivory.

Phoblographer: What do you consider as the most challenging aspect of your visual style? How did you make sure that it shows in your Sapeurs portraits?

Zaidi: To keep their dignity in the images/portraits – not to make them look as objects but as people doing what they believe adds joy to their community in the circumstance they find themselves in their environment, which is challenging. And trying to maintain that balance. Yamea, 58, who has been a sapeur for half a century, brings colour and joie de vivre to his community. He has nine children and works as a brick-layer. His favorite item of clothing is his hat. Hydriss, 35, has been a sapeur for 23 years. He has three children and owns a small bar and hotel. His favorite item of clothing is his Yves Saint Laurent suit.

Phoblographer: Lastly, what makes a photography project compelling for you?

Zaidi: To keep improving my imagery, to show people who can’t travel or see certain places in the world what an amazing world we live in, to show how even though every place is very different – we are all pretty much the same across cultures, boundaries, race and religion. I would like my work to always show the dignity and humanity of the people who kindly allow me to enter their lives, irrespective of their environment.