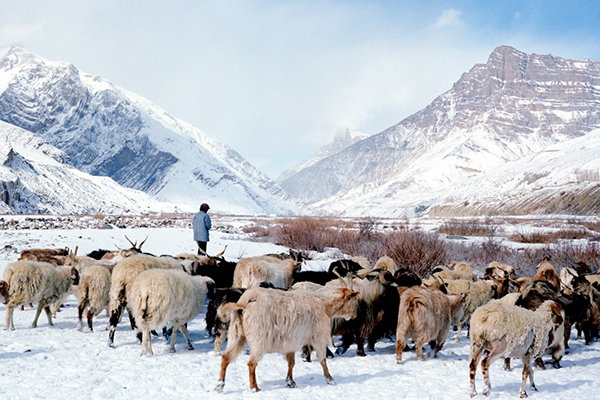 All images by Nandakumar Narasimhan. Used with Creative Commons permission.

The Himalayas is home to some of the most stunning landscapes in the world, but also a resilient people battling some of the harshest winters on the planet. This was the premise that drew Singaporean photographer Nandakumar Narasimhan to its famous peaks in search of stories to photograph. He didn’t return empty-handed, as we can well see in his stunning collection of film photos.

Narasimhan’s series, titled Himalayan Winter: Frigid Frames from a Frozen Land, features a mix of portraits, slice of life, and landscape photos from his 2014 trip to the Himalayas. Visiting during the Himalayas in winter may be crazy for some, but he found the harsh climate “…seemed to make the people warmer in their care and hospitality”. So, he took his time in getting to know the locals and the surroundings before taking photos — something that definitely paid off and earned him some impressive shots. He shared this in his set description:

“Picking up the camera for shooting was very often the last item on the agenda. It was more important for me to find out how they lived and how they beat the winter. I told them where I came from, what I did and what I was hoping to achieve. They, in return, told me what they did, how crazy I was to have turned up in winter and what they hoped to achieve in life as well. So, rather than pointing my camera at every person and opportunity, I took a much slower approach to photographing the subjects during this trip. Most photographs, barring a few, were taken after getting to know the person, his or her lifestyle and profession and also some of the person’s family members.” Another impressive thing to note is that Narasimhan shot everything on film using an assortment of cameras: a Mamiya RB67 with Sekor 50mm, 65mm, and Sekor 127mm lenses; a Yashica 24 with Yashinon 80mm lens; and a Nikon F100 85mm lens. His camera bag, as he said, weighed close to 15 kilos. As for the films, he used a mix of slide films, like Fuji Provia 100F and Fuji Provia 400X, as well as professional color negatives like Kodak Portra 400, Kodak Portra 160, and Kodak Ektar 100. All of these lent a retro vibe that made the series look straight out of the pages of an old issue of National Geographic.

Nandakumar Narasimhan has included some anecdotes for all the photos, so we suggest checking out the full series on his Behance portfolio.