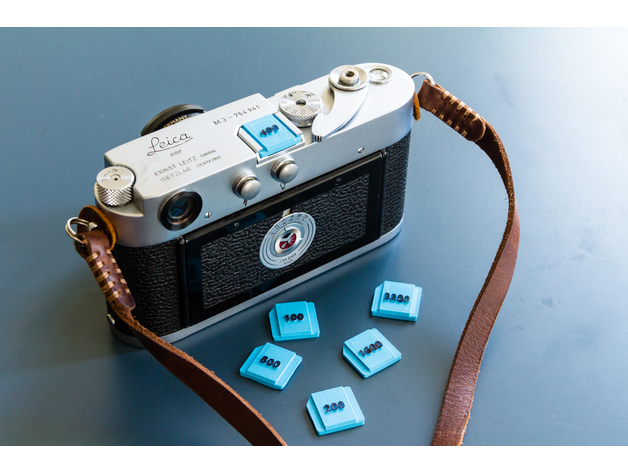 Forgetful film photographers could use a set or two.

One of the smaller frustrations of anyone who has ever shot on film is forgetting film speeds when they’re shooting. This is especially true when you spend long intervals in using up just one roll of film and your camera doesn’t have an ISO/ASA dial or that thing at the back where you can put part of the film’s box that indicates the speed.

Sure, it can easily be remedied by taking a piece of paper tape and writing the film stock and speed on it, and sticking it on the back of your camera. But if you have access to a 3D printer, I don’t see why you shouldn’t try this nifty solution by photographer Guy Sie: 3D printed hotshoe covers with film speeds embossed on them. Guy decided to create them after experiencing one too many mishaps while shooting with his fully manual vintage Leica M3. He recounted:

“On my fully manual ’50s Leica M3 rangefinder camera, the ISO film speed indicator dial on the back only goes up to 200 – the fastest speed available at the time. With film speeds going up to ISO 3200 now the dial is basically useless so I don’t bother with it, but then I have to remember what film I loaded last time I used the camera – which might be weeks ago. So, was it Delta 3200? Was it T-Max 100? Or maybe Neopan 400? Oops.

“After screwing this up a few times too many, I modified gcardinal’s hotshoe covers by adding ISO speed numbers to the top. Load your camera, swap out the cover for the right ISO, and never forget what film is loaded again!”

Sounds cool, right? The files are available for download on Thingiverse so give it a go!