Five Tripods for the Traveling Photographer Vacation season is coming up soon–and if you’re the type of photographer that loves shooting grand scenes, you’ll probably need a tripod to prevent camera shake. It isn’t always possible to know what kinds of photographs you’ll be taking on a trip, so it’s a good idea to have a well-rounded kit. A tripod, particularly a lightweight one, is a great thing to have with you on your travels because not only do they stabilize your camera but they also force you into a whole new perspective.

Whether it’s food, landscapes, macro or long exposures, you’ll want to have something to keep your camera absolutely still. And that’s why we recommend some of these options. 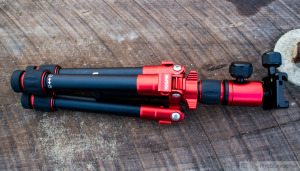 Folded, the MeFOTO DayTrip Tripod is just 9.4 inches  long, which makes for easy storage in your checked  luggage or your carryon. It eschews a complicated design  in favor of simplicity. Despite its small size, the head handles smoothly, and there’s a hook below that you can use to weigh it down.

The legs fold up to keep it compact, and are deployed by twisting the rubber dials. Keep in mind that the maximum height of this tripod is 24-inches, so if you want your camera higher, you’ll have to set it on a higher surface. But otherwise, you can shoot from below and view the world from a different perspective.

We wish the bubble level wasn’t in such a disadvantageous place, but we’ll let that slide. One of MeFOTO’s biggest advantages though has to do with their variety of colors that help you know which tripod is yours when they get mixed in with others.

“We really can’t say very many bad things about the MeFOTO Daytrip tripod, but something that really bugs us is the placement of the bubble levels. To be fair, one can always shoot a little wider and crop/rotate in post-production. And in fact, many professional shooters often do that.

The Daytrip’s fun colors give it a slightly fashionable edge for the photographer looking for something a bit different. And it does this while not sacrificing functionality. In fact, you’ll want to carry it lots of places with you.” Pro Tip: Doing some urban exploring? Bring a flashlight with you. It will not only help you navigate areas but you can set your camera down on a tripod and light paint the scenes. Coming in at 2.2 lbs, the Gitzo GT1542T Traveler Tripod is a more robust option for those looking for something with a bit more length. The tripod has a max height of 58.7-inches and a compact height of 16.7-inches. Plus, it’s got enough muscle to support up to 15.4lbs. Granted, it doesn’t have a ball head, but we can work around that.

This is more likely to be checked than a part of your carryon, and while that may be disconcerting to some, the Gitzo’s made of carbon fiber, which can withstand the elements.

Gitzo tripods are built to last. The reviewer of this tripod bought his last Gitzo in 1988, and has clocked some 150,000 with it. Though he found this one to be better than his time-tested one.

“The Gitzo Traveler GT 1542T delivers with simplicity and grace what other brands can only hope to duplicate.  One of the finest examples of genius-level engineering and high quality materials meticulously assembled makes this jewel of a tripod worth the premium price. There are very few companies building tripods with the Reputation of Gitzo. It’s the best combination of weight, height and durability compared to anything else in this price range. And yes, they are expensive….but worth every shekel and then some.” 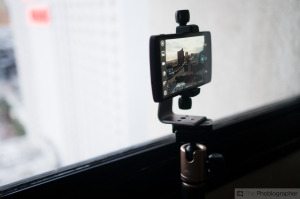 The MeFOTO SideKick 360 Smartphone Tripod Adapter is something for mobile enthusiasts. The SideKick 360 is a mount for your phone that you can then attach to a tripod that has a standard arca-swiss plate base, which’ll work with most tripods.

The adapter can hold your phone in portrait or landscape mode, which is a boon for Instagrammers, Viners and Hyperlapsers alike. It also means that you’ll be carrying much less gear with you if you only have a phone. The adapter is designed to hold many phones and can even get a firm grip on Galaxy Note phones.

We advise taking your case off your phone, so that the adapter can effectively hold your phone in place. Also, make sure that your phone doesn’t go to sleep.

“Overall, this is one pretty darn sturdy piece. We wish that the ball head and the knobs were a tad smoother though instead of so loose, but otherwise we don’t have much to complain about. The accessory is made of metal and has very little that would make us question its durability.” If you’ve got a heavier kit, you may want to consider the 3 Legged Thing X1.1 Brian, a 3.5-lb carbon fiber tripod that can support up to 17.6 lbs. It collapses to 16.5 inches, which’ll fit easily in your checked luggage. This’ll bode well for full-frame shooters with sizable zoom lenses.

What sets this tripod apart is that one of its legs can become a 51.5-inch monopod, which is great for photographers on-the-go and videographers as well. That’s super useful during a hike up the mountains.

It also comes with the AirHed 1 Ball Head, which makes 360-degree panning a cinch. You can get a lot done with this tripod.

“The 3 Legged Thing X1.1 Brian Evolution 2 Carbon Fiber Tripod System is astonishing. It was almost like the Swiss army knife of tripods.  This tripod left me confident I could use it for anything.  It’s actually more of a multi-pod, which, for its cost, offers a massive amount of practicality. For me it has everything I need and more. I had this tripod in so many different situations, and it never failed me. I took a long time with this review but I kept finding cool things about Brian. I was learning about lighting, and Brian had a function for that. I had to do a head shot, so I put an umbrella on Brian. I decided to do some low angle photography in front of a water fall, land scape photography, walking with it as a monopod etc. etc. etc., and it performed beautifully.  I can’t honestly think of any other tripod that has satisfied me this much. As a result, the X1.1 Brian Evolution 2 Carbon Fiber Tripod System gets my highest praise.” This is without a doubt the smallest tripod in the list, but that shouldn’t discount it. It’s less about height and more about giving your camera some leverage on any given surface. Plus, it also means that you can tote it around with you anywhere.

Granted, you won’t be mounting a camera and a super-telephoto on this tripod, but with a standard body and a prime lens, you’ll be set. There are strict limits to what it can support, but you wouldn’t be using this for complicated shoots.

Think of it as an ideal choice for long exposures at the park, and it’ll take up very little space in any of your bags. Hell, you could even slide it in your pocket.

“The Ultrapod II is another of my favorite desktop tripods. While it does one thing the Magnesit Copter Mini Tripod does not, I like the Magnesit Copter Mini Tripod for the camera much more. I like the Ultrapod II better for flashes because I can tie it to a tree or railing and make an impromptu light stand with some height. With the Colman I feel better using heavier gear and I can take the tripod head off and just use the legs. Overall, it just feels better.”