All photographs shot by Rosanne de Lange. Used with permission.

What is it about places that are forgotten by time, that fascinate us so much? Perhaps it’s because of the fact they represent the ending of things, which in many ways remind us of our own mortality that, as morbid and scary of an idea as it is, still hold a hypnotic power over us, as if our bodies and our minds find our eventual deaths both familiar and comforting.

“…the beauty of decay is really something that appeals to me. It’s a combination of excitement about being in an abandoned place, thinking about the history of that place and at the same time the beauty of nature overtaking that place.”

“In July 2010, I finally got to visit the beautiful car graveyard of Chatillon. We arrived very early in the morning, it was still a bit dark and foggy. When we walked into the forest it was just like any other forest, until, one by one, we saw the cars appearing through the trees.”

She recently shot images of Chatillon Car Graveyard. Her photos of the abandoned cars resting there, many from more than 60 years ago, have already gone viral, the social networking media at blaze with ooohs and aaahs about them. And it’s easy to understand why – whether we can admit it or not, humankind is fascinated with death, and those disregarded cars’ rust and stench of decay only add to their allure.

Of course, it also helps that Rosanne deftly captured not only the chilling fact that all things must come to an end, but also the promising idea that even inanimate object don’t give up easily without a fight and some things do endure, albeit not forever.

“It was an amazing place to be and I wish I could go back to take some more photo’s. Unfortunately that’s no longer possible.”

At least, through her beautiful photographs, she was able to immortalize them. See them after the jump. 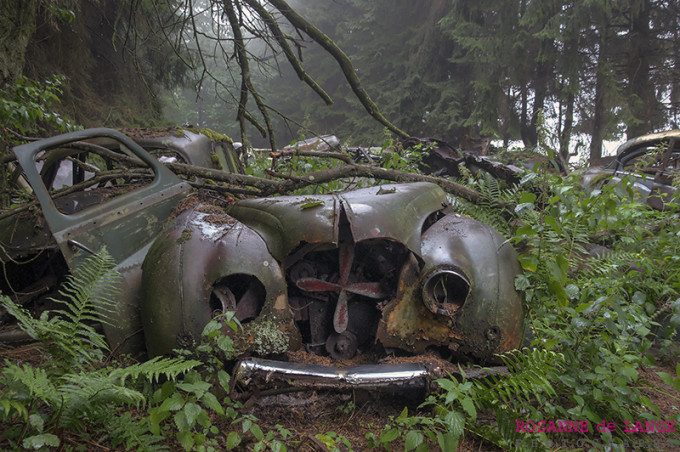