Pancake lenses have come into some popularity in recent years, and Canon has answered with their own version, the EF 40mm f/2.8 STM. Some may question the point of a fixed lens that is only f/2.8 these days, but there are plenty of reasons to pick up a lens such as this. I have quite enjoyed my time with the lens so far, and I am looking forward to spending a lot of time with it in the future. Read on for my review of this little (and I do mean little) lens. The EF 40mm f/2.8 is the smallest lens currently produced by Canon for the EOS system. It has a new type of AF system (for Canon) called a stepping motor (STM for short). This AF motor is designed to work with the Live-View AF system of the new T4i (and presumably future DSLR body releases from Canon). The idea behind the stepping motor is that it’s supposed to allow continuous AF during live-view and video recording with the Contrast-Detect AF (CDAF) system of the new T4i. Given that I don’t presently have a T4i, I can neither confirm nor deny this improvement in AF speed during live view. 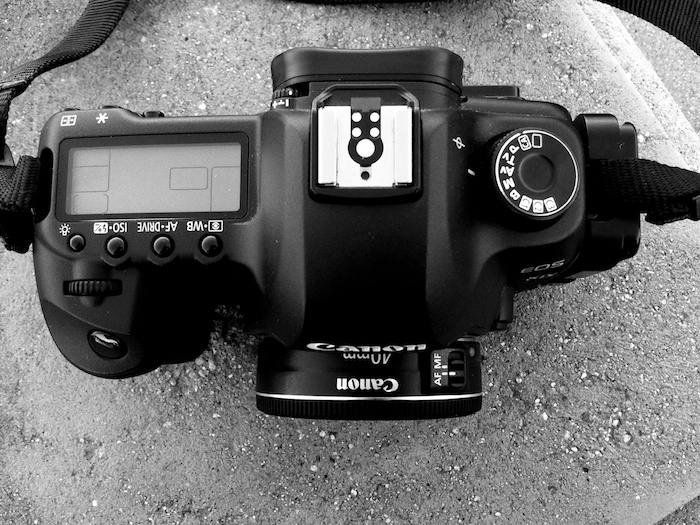 The big selling point behind a lens such as this is its extremely compact dimensions and light weight. You could literally fit this lens in almost any pocket (with the exception of extremely skinny jeans) and it wouldn’t even weigh you down any more than your cellphone. With a lens this small, it’s obvious that Canon was not going to be able to fit a full size focusing ring on it, this does make it a little tough to manually focus, it is also an electronic link to the focusing motor, so there is a slight hesitation when you are turning the focusing ring (I do mean slight). The reality is that a lens like this is going to be used more often than not in AF mode so I doubt it is going to be much of an issue. As you can see from the images, the lens itself barely extends beyond the grip of my camera. It makes for a very small and discreet package (for a full-frame SLR). In fact, I have found that it makes shooting with a camera such as the 5DmkII out in public incredibly easy as you’re not bumping into people, or putting a giant lens in their face. I just sling the camera over my shoulder and go, simplicity at its best. Aside from the aforementioned small focusing ring, my other wish for this lens would be a decent lens hood. Canon does indeed produce a hood for the 40mm f/2.8 (the ES-52) but I fail to see how it will be of any use to be honest. It does not appear to shade the front element, it seems to be more of a protection hood. I’d just as soon put a 52mm filter on there instead, seems that it would be better protected that way. Though if I could have a hood that offered both protection and proper shading I think I would be happy, despite the fact it would sacrifice some of the small size. Thankfully the 40mm f/2.8 is actually highly flare resistant (at least in my usage so far), so having a hood isn’t as much of a necessity as it is with some other lenses.

As previously mentioned, the EF 40mm f/2.8 has a new type of AF motor for Canon, it is quite similar to what you would find in a mirrorless camera system. That being said I did find it to be a touch slower than my other canon lenses which have the USM motor inside, however the the slight lack of speed does not mean the lens is any less accurate. I did have to perform a microadustment of the lens with my 5DmkII but once done it has been spot on at all times. The lens does make a little noise when focusing as well, it is not the awful ratchety grinding sound of the older AFD Canon lenses, but it is distinctly more audible than any USM lens. Though the reality is that you’d probably only notice it in an exceptionally quiet room. Something worth mentioning is that the MFD of this lens is under 12″, this allows you to get exceptionally close to your subjects and maintain sharp focus. I can think of dozens of situations where this would be useful to have available. One troubling thing to note however, is that while the front element does not rotate during focusing, it does extend outwards. This is worth mentioning because the camera must be powered on to retract the lens, so if you turn the camera off and forget to retract the lens, you have to turn it back on and do so manually. DO NOT just push the front element back in, that will break the AF motor. 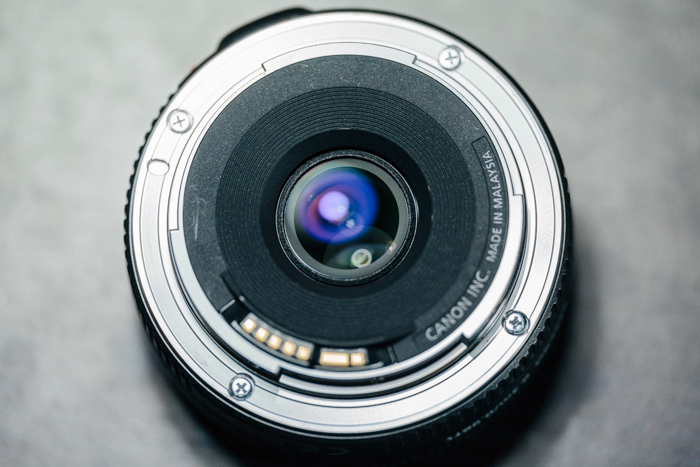 For this lens’ price point I figured it would be made decently but probably have some faults. So far I can’t find even the slightest hint of wobble or manufacturing imperfection. The lens body is constructed solidly and has a metal mount (thankfully). The AF/MF switch is also solid and of the same quality as Canon’s “better” lenses. If it matters to you, my lens was made in Malaysia and not in Japan. I have seen other Canon lenses that were made in Taiwan, and I’m sure there’s a handful of otherplaces, but every one of my other Canon lenses came from Japan. Despite this, I don’t find the build quality of this little 40mm to be inferior in any way, I feel confident that it will last as long as I need it to.

With most lenses, this should truly be main factor that you care about when deciding what to purchase. There are certainly many things to consider when purchasing optics, but in my honest opinion, image quality is what matters. Now, here we have a lens that costs between $150-200 that delivers some really quite impressive detail in the center. The edges are a bit soft wide open, but honestly are you going to even notice? There will be some decent bokeh smearing the corners at that point so who’s going to care about corner detail at that point? I’m not much for “scientific” lens tests personally, and I want to share how this lens performs in real world actual usage.

As I mentioned, from f/2.8 on this little gem is way sharper in the center than I expected it to be, and things only improve the more you stop down. For me, by f/4-5.6 you’re looking at edge-to-edge sharpness and very little to complain about. In fact, what I’ve been enjoying doing lately is just setting the lens at f/5.6 and shooting away. There is plenty of DOF by this point, and the focus is quick enough that I can pretty much get things into focus right away. This is fantastic for fleeting moments, or for street / documentary type image-making, particularly on a full-frame camera like my old 5DmkII as the package is “relatively” small and very nimble. I tend to be pretty critical of the image quality in the lineup of lenses that I personally own, I tried to find something I didn’t like about this lens, or some reason it wouldn’t be up to snuff, and I failed, I simply cannot find anything wrong with it. Some complain that it’s not fast enough for a prime at f/2.8, I would typically agree and say that I do wish it was at least f/2, but again, for the price-point, our expectations have to be realistic. Some also complain that it is an “unnecessary” focal length, but I beg to differ; 40mm is a very versatile focal length in my opinion and one that is capable of shooting a wide range of topics. 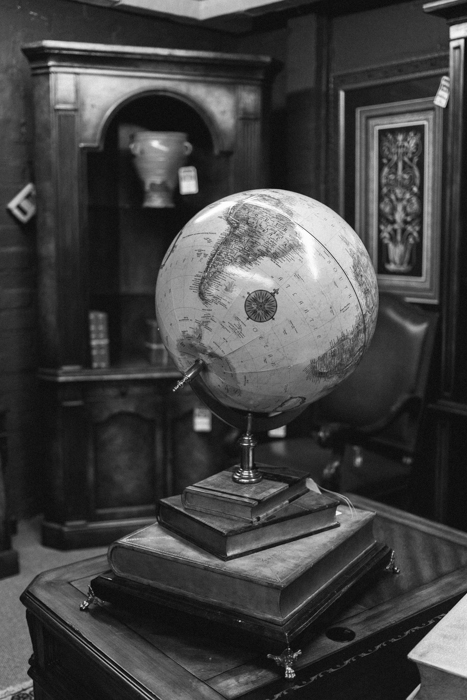 My intent for purchasing the lens (despite owning Canon’s 35mm f/1.4L) was purely for the extremely compact size of it. I don’t always want to carry around large camera rigs, and when those occasions arise, I have felt perfectly comfortable taking only the 40mm and my 5DmkII body and heading out for the day. For those that know me, and my tendency to “bring everything just in case” that is a HUGE deal to be comfortable to leave everything else at home. The quality is that good. To sum things up, I was extremely surprised with the Canon EF 40mm f/2.8 STM lens, the image quality delivered was beyond what I expected from a lens at this price point. I do wish the manual focus feel was a bit more responsive, and the AF speed just a touch faster, but I can certainly live with it as-is and have no issues. For $150 (as of Nov’ 2012) I feel like this should be a no-brainer purchase if you want the smallest lens that Canon currently produces. It does dramatically reduce the physical size of your rig which is quite useful for street photography applications, also, let’s not forget how cute and tiny it is! As always, thanks for reading, and I hope you find some of this information useful in your decision-making process. Please leave a comment if you have any questions.