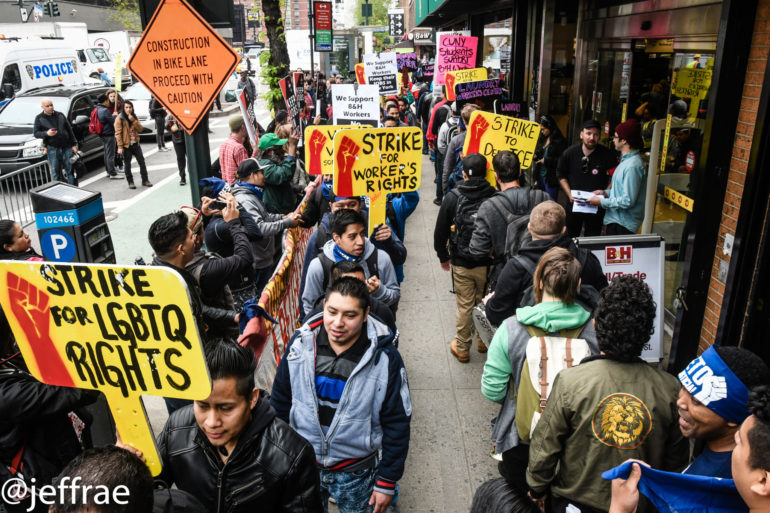 Photo by @Jeffrae provided by the Laundry Workers Union

For over a year, workers at the B&H photo warehouses have been protesting for better treatment and for the creation of a union. In fact, the issue has become so large that it’s now been a class action lawsuit put into place by the US Government, and backed up by controversies for the better part of 10 years. So it comes as a bit of a shock that workers are still protesting outside of the store the way they were this morning.

According to a press release, over 200 workers from the Brooklyn and Manhattan warehouses have gone on strike for the entire day. It all started with reports of discrimination against Latino workers. But there is an even bigger issue now at hand. The workers are being told that the warehouses they work in are being moved to New Jersey; which makes it very difficult for them to get to work.

As you most likely know because you’re reading this website, B&H Photo is a huge name in the photo industry. Lots of NY based photographers have started going to other retailers as a result of this such as Adorama, FotoCare and K&M–especially since the latter is open on the weekend.

We’ll update this post when B&H Photo issues a comment, which they typically send out to the media.

The press release is below:

Over 200 workers from B&H Photo Video’s Brooklyn and Manhattan warehouses have gone on a day-long strike, in conjunction with “un día sin inmigrantes” strikes happening around the country.

Hundreds of workers and supporters picketed outside B&H Photo’s retail store in Manhattan this morning. A delegation of workers and community members delivered a letter to B&H management, demanding that the company “respect and acknowledge that WE, 300+ B&H warehouse workers and our wives and children, who have been without us, dedicated our lives to building up your operations… for decades.”

B&H Photo workers reportedly worked under extremely dangerous conditions in the warehouses. They decided to fight back, trained with Laundry Workers Center for over a year, and in 2015 voted overwhelmingly to form a union.

This year, B&H announced plans to close its Brooklyn warehouses and move almost 330 jobs 75 miles away to New Jersey, making it nearly impossible to for the predominantly Latino workforce to keep their jobs.

“We are here today to let B&H know that we, the workers, have the power. We will not allow B&H to leave over 300 workers without a job,” said warehouse worker Francisco Pimental.

“We see this an attempt to bust their union and stop the grassroots worker organizing that has resulted in concrete improvements at B&H”, said Rosanna Rodríguez, co-director of Laundry Workers Center.

B&H workers also saw the strike as part of a larger struggle against injustice, as hundreds of thousands of immigrant workers participate in a general strike, or “Day Without An Immigrant”, on May 1.

In an earlier statement, warehouse worker Rigoberto Gallos wrote, “Our communities have come together to stand against the Muslim ban, against ICE, against the violence on communities of color and the working class, that has been going on for a very long time.”

“This is a call to keep fighting for dignity and justice. Today, we are in solidarity with all workers around the world.” said Rosanna Rodríguez, co-director of Laundry Workers Center.

Workers vowed to keep up the struggle. “We are striking for dignity and respect, and we will fight to the end,” said warehouse worker Jorge Lora.

Editor’s Note: One of the Phoblographer’s affiliate partners is B&H Photo. But since this protests started, we’ve have stepped away from promoting any of the company’s deals in our Cheap Photo round ups or intentionally linking to them. Once this has all been diffused, we will make a final decision.