Some of us like to take pictures and some of us need all the resolution we can possibly get from our images. With that in mind, we should be very aware that the megapixel race in the camera world still isn’t over. At the moment Canon, Nikon and Sony all have very high megapixel camera bodies to appeal to the user that wants to create large prints, needs to do a lot of retouching or otherwise just wants to sit there and make the rest of the DPReview forum readers super jealous.

The competition includes the Canon 5Ds, Nikon D810 and the Sony A7r Mk II. All three of them are highly capable cameras and have features that appeal to different users. And in this post we dissect which one may be best for you.

Tech Specs at a Glance

Read the full review of the Canon 5Ds here.

Read the full review of the Nikon D810 here. First off, we should realize that Canon’s 5Ds and Nikon’s D810 are both big, bulky DSLRs while Sony’s offering is a smaller mirrorless camera body. They all have lots of buttons and dials that are strategically placed for the best use by the photographer. The 5Ds feels much like the 5D Mk III and the Nikon D810 very much resembles the D800 and D700 before it. With Sony, there were some big ergonomic changes from the previous A7r.

Overall, I feel most comfortable with a Nikon DSLR in my hand–even though I’ve been a Canon user for many years I prefer the feeling of the 6D to the 5Ds. On that wavelength, I think that Sony should embrace the retro aesthetics a bit more. Their ergonomics are nice, but they’re not dethroning Olympus or Fujifilm here. Sony claims splash and dustproof endurance to the elements, but not weather sealing. However, both Canon and Nikon claim weather sealing on their DSLRs. During our periods with the cameras, we were able to shoot with them in the rain with no major problems–but to be fair the Sony A7r Mk II can do the same thing.

When it comes to overall weight and feeling in the hands though I’m more partial to Nikon and Sony. Nikon’s layout makes a lot of sense and I’m just overall working with more mirrorless products these days–hence the soft spot for Sony here. In the past couple of years both Canon and Sony have undergone major menu system overhauls. Canon’s color coded menu system had many sub-sections but nowhere as many as Sony’s. I’ve been a Sony camera user for years and sometimes I still get trouble finding the exact spot for the format card command. On the other hand, I’ve mostly wrapped my head around Canon’s changes; but I still feel that it’s overly complicated in many ways where it doesn’t need to be.

Of course, it can be argued that this means that the cameras are more capable, but it also can simply just get in the way of taking a picture.

What we really appreciate about the Sony A7r Mk II though is that it is the only camera on this list with WiFi transferring abilities and can also shoot 4K video. For that alone, it gets a really solid acknowledgement. 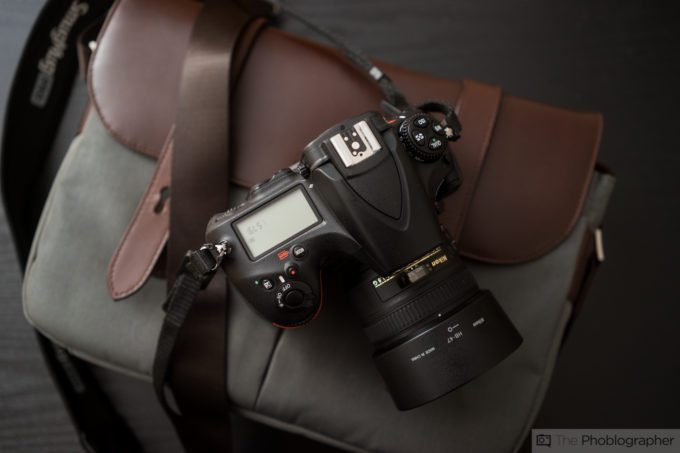 Additionally, the EVF in Sony’s A7r Mk II is incredible if you’re visually impaired. Focus peaking and all the details you could possibly need are clearly displayed for you to focus properly without having to use the LCD screen for Live View mode. All three of these cameras are very, very capable when it comes to autofocusing in bright light, the dark and even fast moving subjects. For the best results with any of them, your most recommended practice is to place the focusing marker over a high contrast point.

In our tests, what we were most surprised by is the ability of the Sony A7r Mk II to focus faster with Canon lenses than a Canon DSLR can–and that includes the Canon 5Ds.

The Nikon D810 is very capable in extremely low light, but not as good as the Sony A7r Mk II–which is the clear winner here. Even so, the Sony A7s Mk II bests the A7r Mk II in autofocus performance.

Here’s the big deciding factor that many people will care about quite a bit: which one is the best? Of course, the Canon 5Ds is going to give you the most resolution. In our review, we were also very impressed with the color depth and the high ISO results but we expected more from the dynamic range. For what it’s worth though, both Nikon and Sony seem to offer much better high ISO results even with such high megapixel counts. Granted, neither of these cameras are 50MP full frame sensor beasts. Additionally, both the Nikon and Sony seem to have better dynamic range when it comes to dealing with the highlights. However, all three perform well when it comes to pushing the shadows. Our favorite image quality comes from the Sony A7r Mk II; and the camera has an excellent lineup of lenses to also justify this fact.

All three cameras have very good color depth and to be honest I can’t tell which one is best at all. Each of them are highly capable and you’ll have no problems selecting either one. Just get a handle of the Color Channels in Adobe Lightroom and you’ll be fine.

Now here is the big, big part of the equation when you’re going to consider each system. Yes, we’re going to talk about photography and the idea of a camera system here because if we were just talking about the camera itself, we’d be doing you a great injustice.

Canon has loads and loads of lenses–not just first party but many third party options too from Sigma, Tamron, Tokina, Zeiss, Voigtlander, Rokinon/Samyang, Lensbabyand many other manufacturers. Plus their TTL flash system is highly supported in flashes and now even monolights from Profoto and Phottix.

Nikon has pretty much the same level of support. Sony is the big newcomer here with the FE mount; and so the only companies that natively support them are Rokinon/Samyang and Zeiss. To be fair, they can adapt Canon and Nikon lenses and even focus faster with Canon lenses than some Canon DSLRs can. Further, the entire Alpha (A mount) lineup of lenses can be attached via an adapter. However, not everything will always guarantee autofocus. In terms of flashes and lighting, Sony’s flash system needs to be triggered via infrared triggers natively and the radio options for the multi-interface hot shoe aren’t there yet at the moment of publishing this post. (see below clarification) If all you want are lenses, then you’ve got lots to choose from; but flash work will require you to basically just work with manual flash.

Editor’s Note: as a matter of clarification about the Sony statement what we mean by the systems not being there yet is that: In all complete honestly, any one of these cameras will give you great results. But beyond that, modern post-production software is the great equalizer in photography and if one image from each of these cameras shooting the same scene was created and then all of them were edited to look the same, you wouldn’t be able to tell the difference between any of the three–especially if it was shot with the same Zeiss lens in Nikon F mount and mounted to each of the cameras.

Compatibility is only a major issue if you find that you’ll need to invest in lenses and lighting; and that should be carefully contemplated before pulling the trigger on either of these cameras.

The feature set of the Sony A7r Mk II is quite extensive, but both Nikon and Canon have a timelapse mode. If you want it from Sony, you’ll need to download the app and pay more for it.

Before you even consider batting at eye at these cameras you should also consider investing in new hard drives to hold all that data or some sort of cloud service like PhotoKeeper or Mylio.

As far as RAW image quality goes though, they’re all fairly comparable. Autofocusing on each is stellar and the build quality on all of these cameras is more than appropriate for every day work though the DSLRs still have some advantages.

On a very personal note, Canon is still my choice when it comes to lots of my work for the reason that the Sigma lenses I own are natively supported. My work these days demands manual flash control vs TTL–so that lets me use any system I want as long as a radio trigger connects to the hot shoe. Much of the site’s product photography is done using either Sony, Canon or Fujifilm cameras.

Sony is very close to catching up with all that Canon and Nikon can do; but it’s still not totally there. In many ways, they’re far ahead of what Canon and Nikon are capable of–and those ways appeal most to the non-professional photographers. For working pros in the wedding and photojournalism world that need TTL flash and more lens selections; we’re going to need to wait.